Film of the year

The last few weeks of every year are an opportunity to look back and retrace the last period in search of the most significant events. In the world of cinema, one of the most eloquent films of the year – perhaps the most meaningful – is Roma, by Alfonso Cuarón.

Cuarón, after the success of his work of science fiction Gravity (7 Oscars in 2014), leaves the universe of space and lands in Mexico City with the film Roma. His latest masterpiece – winner of 3 Oscar awards this year (director, foreign film and photography) – takes its name from Roma, a neighbourhood in the Mexican capital where the director grew up. The film is a return to places, events and people from his childhood. Set between 1970 and 1971, it recounts the joys and sorrows of Cleo, a young domestic of a wealthy family in the Mexican capital. The girl is not only a woman of humble and attentive service; with her strong and discreet, silent and decisive presence she is a point of reference for the family. Her proximity is not reduced to the mere execution of domestic affairs; she is a maid, cleaning lady, baby sitter and “big sister” for the little ones at home. She sweeps, dusts, serves at table and does not skimp on good night kisses. Only Antonio, head of the family, Sofia’s husband and father of the children, often absent for work, seems insensitive to her professionalism.

Cleo’s affective world is populated by her friend-colleague Adela and by a young man called Fermín. However, the protagonist’s love idyll is shattered too early by the unexpected arrival a child’s; the sudden disappearance of her boyfriend, who is not inclined to face this “unexpected task”, is bravely faced by Cleo; supported and encouraged by Sofia, she carries on the pregnancy with dignity and hope. The attempt to make the father of the future child aware of his responsibilities as a parent is met by a categorical rejection: his involvement in the world of martial arts is too important a commitment.

Even her landlady suffers a sudden abandonment by her partner. The husband leaves home, wife and children for a lover. The two women left alone go on with grit and pain.

The time comes for Cleo to give birth; the city is in turmoil due to a series of student protests in favour of democracy that have resulted in the most violent chaos. The capital is blocked and the protagonist arrives at the hospital too late; she gives birth to a dead child. Cleo is destroyed by the pain; Sofia takes her with her children for a weekend in a tourist resort. She is able to free herself from her suffering and to embrace life once again only after having rescued Sofia’a children from the violent current of the sea and having received their spontaneous and animated declaration of love. 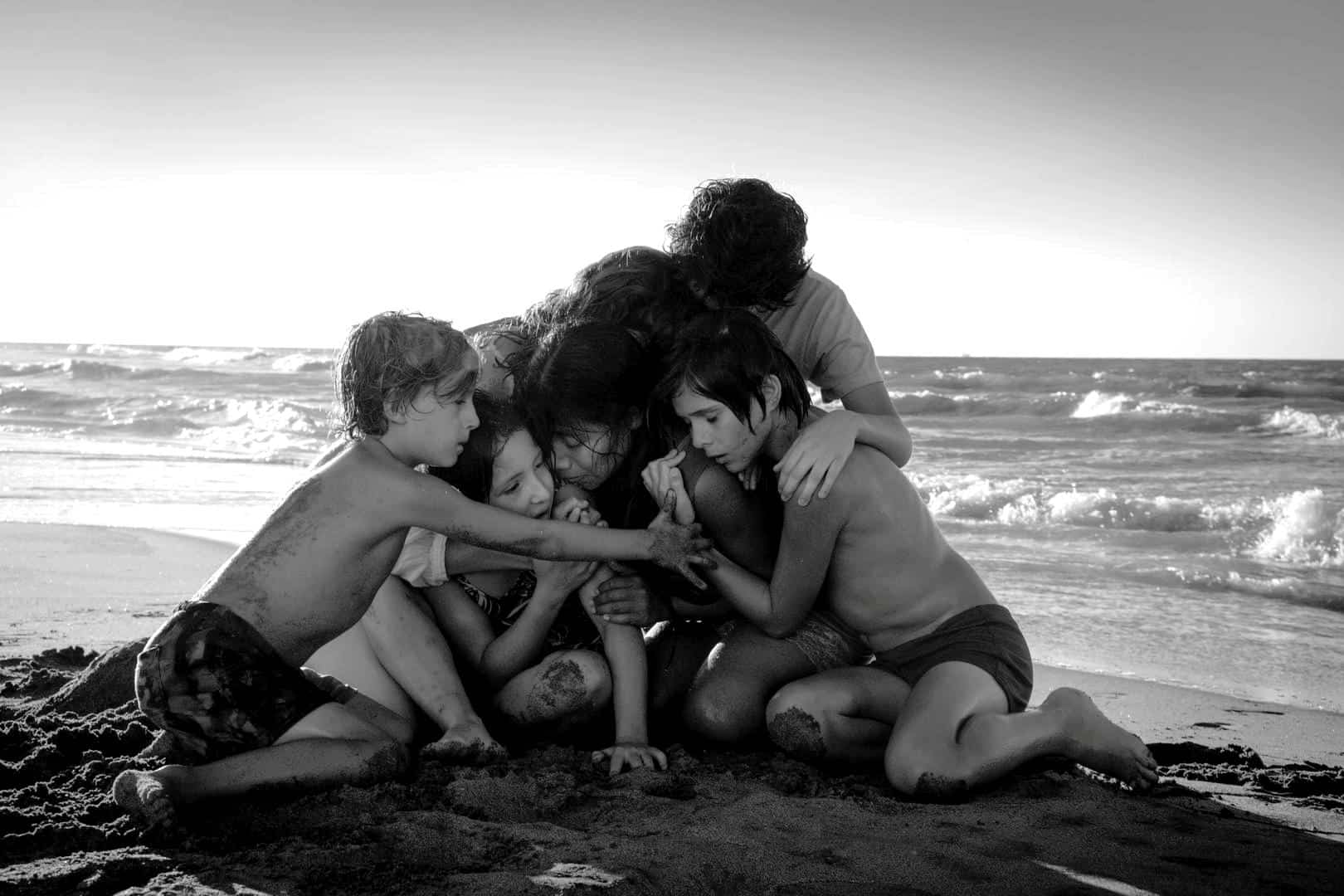 The film is a great tale that weaves together personal and national history, a social fresco of Mexico City in the early 1970s. The director draws on his memories of the past for a historical reconstruction of high fidelity to which he adds the authenticity of the actors and the freshness of the unexpected.

The set was built inside a royal house. Cuaròn, with the help of relatives, recreated the home of his childhood: furniture and personal effects come largely from his family. Even the reconstruction of student demonstrations and the reproduction of economic and social tensions of the time are the result of a meticulous work carried out in great detail.

As in the greatest historical novels, the culmination of the events of the protagonists meets the Great History and its most dramatic junctures. The tragic circumstance of Cleo giving birth takes place on the day of the Corpus Christi Massacre, one of the darkest episodes in Mexican history of the last century: the pro-democracy student protests culminate with the killing of around 120 people by Los Halcones, a paramilitary group backed by the government. 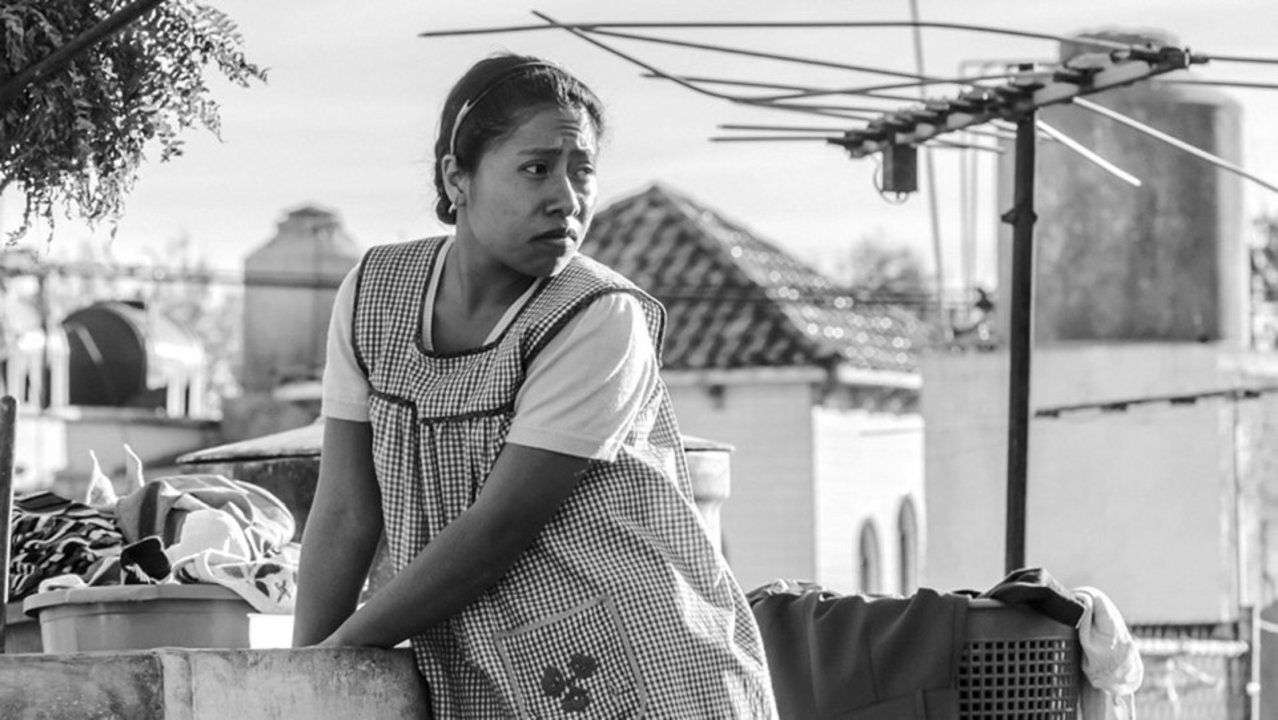 The look at historical reality is revitalised by the presence of non-professional actors. Cleo is Yalitza Aparicio, a girl with no acting experience. Adela, her best friend in the film, is Nancy Garcia, her great friend in real life. The strength of the film owes much to the masterful interpretation of the young protagonist, a girl endowed with a poor richness full of humility, discretion, dedication, docility and respect. Moreover, Cuaròn, so as to favour the freshness and spontaneity of the acting, during the filming would only make known at the last moment the scenes to shoot: any excessive preparation was avoided.

The documentary-like gaze on the reality and the expressive power of the actors – their very selves and their other-selves – embellish Cuarón’s extraordinary script and masterful direction.

Everyday life is presented in the film in its essentials and simplicity: normal conversations, small gestures and ordinary actions describe with clarity the daily routine of the protagonist.

At the same time emerges the constant “exposure to the sacred” of every existence, of which the theologian Sequeri speaks: the great experiences of life, birth and death guide our life in the search for a transcendent sense. In Roma the concatenation of two great themes of man – birth and death – in a few minutes of great cinema is extraordinary. The day Cleo gives birth is the day of the Corpus Christi Massacre. At that precise moment the girl is in a childcare shop to choose the bed of her future baby; at first, immersed between the cradles, she observes the insurrection and some killings from the window. Then “the road enters the room“: a man bursts into the shop, fleeing for his life, and Cleo helplessly witnesses a killing; one of the armed paramilitaries is Fermín who points a gun at her, before fleeing. At that point her waters break, triggering a process of labour at the end of which Cleo will give birth to a dead child.

Another theme suggested by the film is the search for meaning.

Fermín, after having slept with Cleo, explains to her his journey of searching: “I discovered martial arts and everything makes sense, like when you look at me“. His journey will lead him to undertake an armed struggle, taking on a universal responsibility to the detriment of the more serious personal duty of paternity; wanting to change the world in the young can be an excuse for not changing oneself.

Cleo’s path goes the opposite way. The drama of the stillbirth and her sense of guilt for never having really wished for the dead baby to be born, collapses in the finale in front of two situations: the rescue at sea of the children by risking her own life (she didn’t know how to swim) and the authentic and spontaneous declaration of love by Sofia and her children. The discovery of a new fecundity as a fruit of her gift of self to the point of a dangerous rescue at sea and the awareness of being really loved, is a key passage in Cleo’s human journey; she is ready to return to daily life with new eyes.

Cleo’s spiritual-human path is elegantly suggested by the final frame of the film, as opposed to the initial one. At the opening of the film, the opening titles appear on the tiles of a floor, on which water and soap flow; then the reflection of a window appears showing a plane passing by. The last frame takes in the sky and a staircase directed upwards, climbed by Cleo to reach the terrace; and once again a plane passing by. The evocative contrast between the two frames is evident: the first takes in the ground, the last the sky; in the first, the reality of the plane in flight is seen reflected, in the second, directly. Could it not indicate a path of awareness  of Cleo, an exit from the Platonic cave – in which reality is seen reflected on the walls – towards the outside world for a direct confrontation with the truth of things? Perhaps a confirmation of her journey in which the meaning found offers a more truthful and authentic look at the world?

Like the two frames mentioned above, there are numerous moments of great cinematographic excellence: in the first part of the film, the scene of Antonio’s parking lot in the narrow driveway of the house, decisively presents the character of the protagonist – as would be later revealed – without showing his face: in a few precise calculations and cold manoeuvres, the car enters the house arrogantly, crushing the excrements of Borras, the family dog. A clear antithesis with the resigned and modestly heroic attitude of the women in the film.

And the painful scene of childbirth is extraordinary: in a very long, tragic, slow sequence, the scene is framed by the body of Cleo, a woman in labour; the child comes to light soundlessly and the protagonist – with us – turns towards the centre of the scene where, on a table, a doctor and a nurse try to revive the little body; we are all there with her to hope and to suffer.

Another strength of the film is the elegant black and white that favours a contemplative gaze on reality. One could speak of the transfiguration of the everyday; the simplest and most everyday actions and situations acquire new light and beauty. The camera moves in the same direction; slow sequence and tracking shots invite the eye to focus on apparently insignificant details, such as the driveway of a house, a room, a group of people. In our anaesthetised eyes, the wonder of often overlooked details is reborn. Recognising the small dimensions of each day is the first step in finding a meaning and a greatness within the reach of all of us.

The film is a masterful account, a fresco of individual and collective experiences in a specific historical period. The wise direction of Cuaròn realises a work full of truth, lyricism and beauty. It is great cinema and life-experience.